The award winning TOKARA Director’s Reserve Red 2014 is a Cabernet Sauvignon driven blend of four classic Bordeaux varieties from prized vineyards on the slopes of the Simonsberg. Composed of Cabernet Sauvignon (72%), Merlot (18%), Petit Verdot (6%) and Cabernet Franc (4%), this sumptuous blend is a true reflection of everything the estate stands for – refinement, elegance and balance.

The wine also stood up to international critical acclaim in Tim Atkin’s South Africa 2018 Special Report, with a 96/100 score from this highly respected British Master of Wine and expert on the South African vineyard.

TOKARA’S Director’s Reserve 2014 has also excelled on home turf, clinching Gold together with the Reserve Collection Cabernet Sauvignon 2015 at the recent 2018 Veritas Awards, the Oscars of the South Africa’s wine industry.

“Cabernet Sauvignon is the original focus variety of the TOKARA estate since the first harvest in 2000. Being recognised as one of the New World champions at the Six Nations Wine Challenge for our flagship blend, tells us we are on the right track,” says Karl Lambour, TOKARA managing director.

The Six Nations Challenge is an annual competition featuring wines from Australia, Canada, Chile, New Zealand, South Africa and the USA. It recognises and showcases the “very best of the best” New World wines, promoting their outstanding quality, diversity and richness.

Wines are entered into this competition by invitation only and a total of 600 wines are judged by a panel comprising a representative from each participating country. Every year the judges are invited to choose 100 wines that represent the best of their respective countries. South Africa is represented on the panel by well-known wine commentator, Michael Fridjhon. 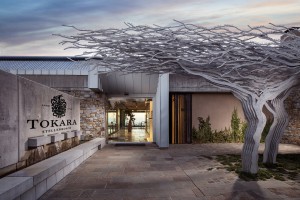