Roodeberg releases 2017 vintage in 70 year commemorative bottle
Roodeberg, the cherished South African red blend that resonates in the hearts and minds of wine lovers the world over, has released its 2017 vintage in regal packaging to celebrate its 70th anniversary.

Launched in 1949, Roodeberg is a true South African original that has stood the test of time. This signature red is the heart and soul of memorable moments having evolved from the master’s original blend to an accessible, contemporary classic in step with changing times and preferences but still rooted in tradition. Its rich heritage and colourful tapestry of wine folklore is the stuff of legends.

Developed originally as an honest expression of Cape red wine, Roodeberg is the brainchild of Dr Charles Niehaus, a legendary pioneer of the South African wine industry, who crafted the first vintage from the 1946 harvest. Predating the launch of this signature blend, a number of earlier portrayals saw the light of day in the early 1940s, including Roodeberg One and Roodeberg Two, a lighter, and a more full-bodied blend. The name, Roodeberg, harks back to the vineyards of Rothenberg near Geisenheim in Germany where Dr Niehaus studied winemaking. It came to him while sitting at his desk, watching a glorious sunset over the Paarl mountains.

From the onset, the composition of the Roodeberg blend was shrouded in secrecy. Roodeberg was openly referred to as a secret blend with a blending panel tasked to determine the final configuration, taking care to achieve consistency with every vintage. After Dr Niehaus retired in 1971, the blend generally comprised Cabernet Sauvignon, Shiraz, Pinotage and Tinta Barocca, according to the Platter Wine Guide of the time. In the 1990s, Roodeberg’s evolution continued with the introduction of small French oak maturation barrels.

For the first 55 years, Roodeberg was exclusively made for export after Canada paved the way in the 1950s. Although not readily available locally until 2004 without an acquaintance with a KWV quota, Roodeberg has always enjoyed iconic status in the hearts and minds of South Africans. It is said that bartering sought-after test match tickets, biltong and the like ‘under the table’ in return for a bottle or two was common practice. According to the January 1986 Wynboer, for South Africans abroad, a glass of Roodeberg was like a hug from home. The same still rings true today. For many Roodeberg conjures up fond memories of people, places and occasions, and of sharing special moments with family and friends, often with rare vintages squirreled away.

For Roodeberg devotees, the 70th anniversary bottle is sure to become a collector’s piece to be opened for a special occasion in years to come.

This famous red blend erupts in your glass with aromatic layers of red fruit, cassis and pencil shavings enriched by warm tones of tobacco and dark chocolate. The palate is elegant and well-rounded with nuances of cedar oak and dark plums, supported by soft tannins that linger long after the last sip.

The commemorative Roodeberg Red 2017 is available at leading stores countrywide, selling at R85 to R89 a bottle. Roodeberg has a host of activities and promotions planned in celebration of its 70th anniversary year. Keep up to date by joining the Roodeberg community on Facebook or follow @Roodeberg_Wine on Instagram and Twitter. 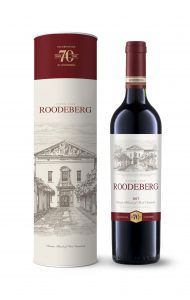